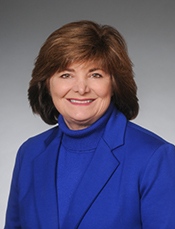 Rep. Ferguson is serving her second term in the Arkansas House of Representatives. She represents District 51 which includes part of Crittenden County. During the 90th General Assembly, Rep. Ferguson serves as the Vice-Chair on the committee for Public Health, Welfare and Labor. She also serves on the Insurance and Commerce Committee and Joint Budget. She was appointed to the Health Reform Legislative Task Force and the Insurance Marketplace Legislative Oversight Committee. In addition, Rep. Ferguson helps provide students with a unique opportunity to learn how our government operates by serving as House Chair of Girls State. For her complete legislative biography, please see-http://www.arkansashouse.org/member/326/deborah-ferguson

What other leadership positions have you held (AMA, Specialties, PACs)? When?
My husband, Dr. Scott Ferguson, is a member of the Council on Legislation and an Alternate Delegate. I have been fortunate enough to attend some of their meetings as well as the AMA meetings.

Why did you decide to take part in the AMPAC program?
My husband was a State Representative 1993-1996 and ran for the US Senate in 1998. We had attended the Campaign School together in 1992. We were neophytes to politics at the time and the training was invaluable.

Have the programs helped in your political/advocacy career? How?
Yes. Beyond the campaign training, the campaign school has connected me to a network of AMA staff people who are well-informed on health issues. I turned to them often for policy positions.

What was the most beneficial component of the AMPAC program for you?
The public speaking session was the things I dreaded most but the most helpful. I had little to no experience in public speaking and this requirement allowed me to really define why I was running. The speech that I gave at the school was simply terrible, but the video helped me improve my message and presentation.

Do you have any words of wisdom for other physicians or spouses who are considering a run for office or actively campaigning for a medicine-friendly candidate?
The importance of physicians and their spouses in legislatures can’t be overstated. I was the only healthcare provider on the Public Health committee my first term. Other committee members relied on my opinion and this helped drive policy. Government will play an even bigger role in healthcare in the future. It is crucial that we have representatives to advocate for patients and physicians.